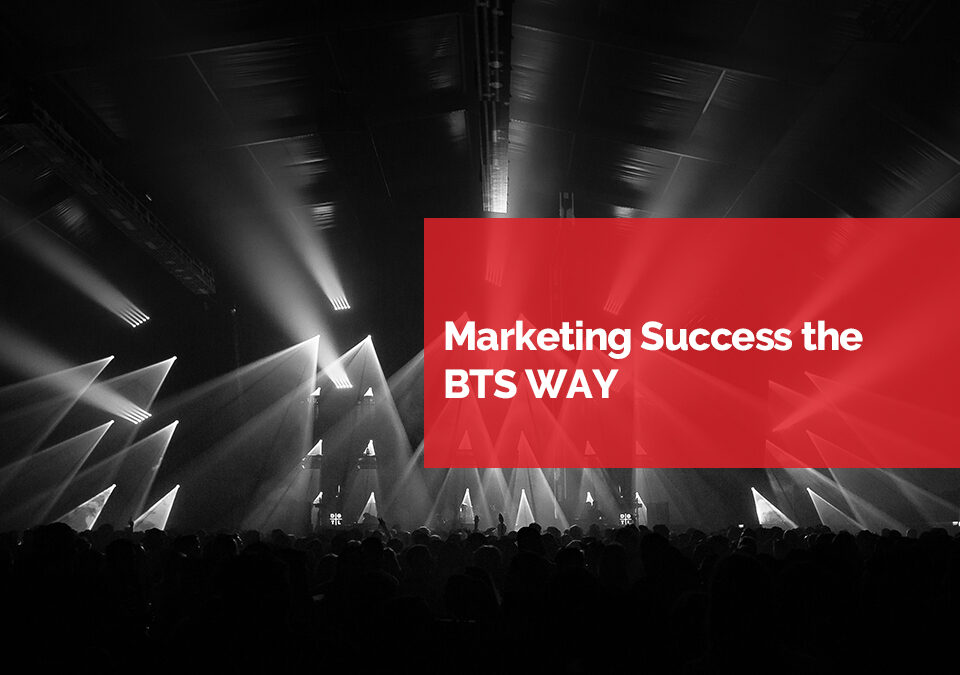 By now the South Korean pop group BTS is well known across Western media. But how exactly did they become such a huge sensation? Much of this success can be attributed to Big Hit Entertainment, the group's management company, who utilizes an incredible multi-tiered marketing strategy.

In a fast-paced world with easy access to information, it's no surprise that companies have turned to social media to grow their businesses. Having a strong social media presence helps gain customers and, in the entertainment world, fanbases. Frequent posting helps businesses gain recognition and gives the customer a sense of consistency. South Korea has become one of the most connected countries in the world, and even before their 2013 debut, BTS had a strong social media presence. Big Hit, who was a small company with few resources at the time, understood the value of social media and used it to the best of their ability. The group’s members regularly uploaded content such as vlogs, selfies, dance and song covers, and more onto various platforms. Platforms they used included Weibo, Fancafe, Vapp, Facebook, Instagram, BTS and Big Hit YouTube channels, and Twitter for both BTS and Big Hit Entertainment. Recently Big Hit created an app called Weverse for both international and Korean BTS fan club members, known as A.R.M.Y., to access. Before Weverse launched, Fancafe was offered only to Korean A.R.M.Y. members with a membership. By offering a consistent presence on social media, BTS has grown A.R.M.Y. (which stands for Adorable Representative M.C. for Youth) at an exponential rate.

It’s not just the group's consistent social media presence that drives their growth, however. Their direct interactions with fans help, too. Weverse was specifically created to allow the idol groups under Big Hit to interact more closely with their fans. Through the app, members can comment and see what other A.R.M.Y. members post. Offering that personal touch allows a sense of camaraderie as fans share personal stories about how the group has impacted their lives or just silly jokes to make members smile. BTS has grown so much that they were able to break Justin Bieber’s six-year winning streak for Top Social Artist at the BBMAs. BTS has now won this award for three consecutive years. Clearly their innovative use of social media has proven to be an exceptionally strong resource.

A key point when it comes to marketing is to "know your audience.” Most entertainment management companies, especially those who oversee male group artists, target female teenagers in the 12- to 18-year-old age range. BTS, on the other hand, takes a more inclusive approach by writing songs that talk about personal issues such as figuring out one's identity and learning to love oneself. This approach has grown their A.R.M.Y. fanbase into an accumulation of many ethnicities, genders, nationalities, and age groups.

BTS has leveraged the enormous platform they have created for philanthropic movements such as their UNICEF campaign. BTS offers a message of self-love, which they carry into their music through the Love Yourself series. The message has become so strong that the group teamed up with UNICEF and had the opportunity to speak to the UN General Assembly in 2018 to promote their message.

"We have learned to love ourselves, so now I urge you to 'speak yourself.'”- Kim Namjoon (RM), BTS Leader

Another key aspect of Big Hit's marketing strategy is international outreach. BTS didn't shy away from embracing fans from all over the world to share their Korean influence. The content provided by Big Hit, including music videos, variety shows, and other videos include subtitles in several languages so that global A.R.M.Y. members can enjoy them. The company makes it a point to provide albums and other merchandise to international countries by selling products through global stores such as Amazon, Target, and Walmart.

In this age of nonstop information access, it is both easier than ever and harder than ever to get one’s message out. By engaging a multi-tiered marketing strategy to promote their K-pop sensation band BTS, Big Hit Entertainment has offered a lesson that all marketing strategists can learn from: engage in social media, use inventive resources that apply to your platform, interact with your audience for a more personalized presence, know your audience, make use of your platform for the greater good, and expand your reach beyond the obvious marketing targets. By employing a similar multi-tiered marketing strategy, most any business can grown their audience quickly in a relatively short time.